Fundraisers For The Power of Elle This Summer

This summer saw no fewer than four fundraisers for the Fund, all of which were made possible by members of the community who cared enough about Elle and the Fund to go out of their way to raise money.

First was the photo fundraiser held by Nadra Edgerly Photography at the end of May. Giving up a lot of their time and effort, the weekend-long event raised almost $500 for the Fund. And provided some amazing photos for people along the way.

Next was a Lemonade and Bake Sale Fundraiser in late July. Put together by Lori Schraier and Tara St. Onge (and on one of the hottest days of the year), their event raised $750 for the Fund. Not only were they generous in all the work and effort they put into the event, but there were many other people who donated time, items, or something equally valuable. Here is a link to the event page on Facebook where you can find an entire list of who donated what to the fundraiser.

Last Thursday was the 2nd Annual Benefit for the Power of Elle held by Jennifer Skinsacos at Ken's Place in Scarborough. You can read about last year's event here. Once again, Elle's mother and aunt worked tirelessly with Jennifer to make this event a success. Thanks to their work and the generosity of not only the many people who donated but that of Dave Wilcox, the owner of Ken's Place, the Benefit raised over $750 for the Fund.

And this past Sunday was Tea for Two: A Dolly & Me Tea Party. This event was put together by Sandy Mekonis. Sandy's daughter, Laina, was Elle's best friend. This event was held at the North Dam Mill in Biddeford. I encourage you to read the event page on Facebook to get an idea of the effort and work Sandy put into this event. So many people and so many companies donated so much to make this happen. Here is a picture of the poster that greeted people so you can see the number of people and companies involved (you can click on it to make it larger). 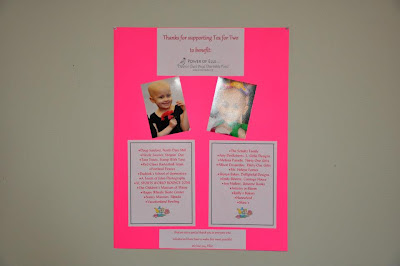 Tea for Two raised $1,461 for the Fund. And made a lot of young ladies (and their mothers) very happy.

In all, this summer the Fund received almost $3500 from these four events. We cannot express our thankfulness and appreciation for all the work these caring people did. But that is a testament to who Elle was, and how many people she touched in her short time here. And because of these efforts, the Fund can continue to make a difference in the community.